In the 1300s, the original adage was longer. Meatier, one might say. That’s because the dish included minced meats (dried fruits, nuts, spirits, and fats, etc.), spices, cereal, and sometimes blood. These ingredients were then stuffed into an animal-type casing and cooked. Not to culinary or temperature-controlled specifications. Hence, the danger in eating such foods. 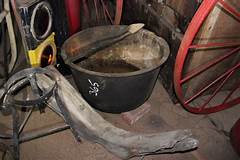 A portion of this adage was then lopped off in 1623 in William Camden’s Remains Concerning Britain. Aware that such sayings were vanishing with the passage of time, Mr. Camden sought to memorialize them in his book.

But even earlier, in fact thousands of years earlier, kings had cupbearers who would sample their wine and taste their food. If the cupbearer didn’t die, the king would then partake. He had proof the food would do him no harm.

From the above information, have you guessed the adage?

SPOILER ALERT: At one time, it was said that the proof of the pudding is in the eating. If said at all, the now antiquated adage is the proof is in the pudding.

There are several Biblical references that predate the pudding. Here’s one of my favorites:

How lovingly the Lord calls us near and extends the challenge to, in modern terms, check Him out. He has no fear that He’ll pass the sniff test! In other words, He is as trustworthy, as good, as faithful as He claims He is. When we pray, He hears our cry. Digging into His word, we’ll find Him there.

Moses found the Lord in the desert’s burning bush and again as the Red Sea opened. At an advanced age, Sarah saw the goodness of God in her baby Isaac’s face. Ascending to the throne, David experienced anew the faithfulness of God. Paul and Silas left the prison, not because the jailer freed them but because God’s power loosed their chains. John wrote what he saw on the Island of Patmos, because God again revealed Himself there.

Because God’s love couldn’t allow Him to enjoy the beauty of Heaven without  each of us, He sent Jesus to pay the price in our place.

Jesus, the promised Messiah in the Old Testament and the risen Savior in the New, still says ‘You’ve tried the rest, now come, put your trust in me. I’ll give you living proof.’