A 1990s internet story about a little boy and his mama touched the heart of DC Chymes, a St. Louis radio personality. Thinking it would make a wonderful song, Chymes took the info to the musical group, NewSong.

After setting the lyrics to music, the composition received minimal interest. So the group sat on the piece for several years. One day, a group member shared the song’s story with his friend Donna VanLiere, whose book about the boy who wanted to buy shoes for his mama became a best-seller and then a movie. People were so enamored with The Christmas Shoes song, book, and movie that Hallmark capitalized on its fame, turning another of Donna’s books into a Christmas movie.

Now, accounts vary as to the way the above events happened. But what about the little boy in the song who wanted to buy a pair of shoes for his dying mama? Did he truly exist?

Not according to Helga Schmidt. No, sir. There wasn’t a boy. But she did stand in a long line with a brother and sister who argued about which one would put the shoes on the counter beside the register. And it wasn’t until she added $3.00 to complete the transaction that she grasped their dire need.

The children thanked her, then shared what they’d learned in Sunday School. They wanted their dying mama’s shoes to match Heaven’s gold-paved streets.

So moved by her encounter with these children, Schmidt wrote the 1970s story as a continuing education piece, which somehow found its way into a newspaper, a church bulletin, and eventually a “Chicken Soup for the Soul” publication.

Can you see the profound impact this story had on each of the people involved? For NewSong, VanLiere, and Hallmark, their fame skyrocketed.

No doubt the help the siblings received, the gift they gave their mother and the motherless years that followed, changed and shaped them.

Because of her generosity, Helga Schmidt received a gift greater than any $3.00 investment. The story she shared affected the world.

Now, for all of us who know the story behind The Christmas Shoes, what was the brightest moment? The moment that truly changed lives. Certainly, it wasn’t what came in a wrapped shoebox or the images that flashed across the silver screen.

Hallmark would’ve never produced the movie from VanLiere’s story. The song that moved us to tears wouldn’t have been written. Schmidt’s money would’ve stayed in her pocket. And the siblings who argued on the store line that day may not have desired to buy shoes for their dying mama – had they not received the hope of Heaven while in Sunday School.

The moment they chose to believe that Heaven is real. One brilliant, magical  moment changed everything.

For them. For us.

“For God so loved the world that He gave His one and only Son, that whoever believes in him shall not perish but have eternal life.” (John 3:16, NIV)

To leave a comment, please click on the title above, A MAGICAL CHRISTMAS MOMENT and scroll down. Thank you for subscribing to this website and sharing it with friends.

Also, please check out  my Amazon #1 book for Early Readers, A Snowflake’s Adventure . In 2021, we donated over 500 for these books to OCC/SP! Thank you for purchasing and leaving a review on Amazon!! Thank you! 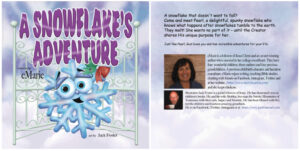 Thank you, Patti, for stopping by! Merry Christmas!!! 🙂

Such a great story! Thanks for sharing.

Hi eMarie. Thank you so much for sharing the story behind the story of this beloved Christmas song.

Thank you for sharing the story behind this story!

Amen, and beautifully stated!!! Thank you, Becky, and Merry Christmas!! 🙂

I love this, Erma. Truly great things happen in Sunday School classes, youth groups, small groups, Bible studies, etc. and they are not always measureable. But when spiritual seeds are planted, we can trust God to help them grow.

And thank you for stopping by, Anne! Merry Christmas!! 🙂

Thanks for sharing the true story!

That’s really cool. It’s exciting to see the life-changing difference that one Sunday School lesson can make. The difference that a spark of hope can make, hope born in a manger so long ago:)