Though oft-quoted, this adage has been challenged, tested, rejected, and accepted. It has even been used as a book title. But few have applauded its origin.

In John Heywood’s 1546 book of proverbs written in the Old Englishe tongue the line reads:
some heads haue taken two headis better then one: but ten heads without wit, I wene as good none.

Were you able to decipher the adage?  🙂

A 2010 article in Scientific American entitled, “Are Two Heads Better than One? It Depends,” set out to prove a problem-solving premise: do we perform better and make smarter decisions when we work together or alone?

Turns out, two heads are better than one. Other factors that play a role in two-headed or team success are included in the article.

In 2016, a Psychology Today article cites research by a Carnegie Mellon University professor suggesting that a group’s intelligence can surpass its individual members.

So who should we thank for gifting us with this astute adage?

Not so according to Ecclesiastes 4:9. 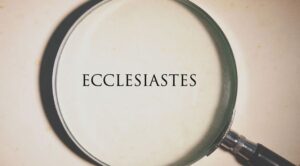 “Two are better than one, because they have a good reward for their labor.”

The author of Ecclesiastes went on to explain that if one of the laborers falls, the other will pick him up. But if someone labors alone and falls, he has no one to lift him up. Together, we not only avoid pitfalls but are apt to work faster, smarter, better.

Ah, but that wasn’t the first spotlight the Bible places on this adage. No, no. We have to go back to where our story begins. In Genesis 2:18, the Lord God said “it is not good that man should be alone; I will make him a helper comparable to him.” Not lesser, not better but “comparable” (like, similar, equal to. . .).

God created us to share each other’s burdens, to gather together (Heb.10:25), and to live in unity.

Sure, we also need time alone with the Lord in prayer, in His Word, to fulfill His call on our lives, to catch a fresh glimpse of God’s goodness.

But, God, in His wisdom, made us better together. He provided a way for a more enjoyable, lighter workload with greater rewards. By His design, two heads are better than one!