So often, the debate rages whether or not America was established on Judeo-Christian principles.  Here’s an interesting quote from June 1926, when the U.S. Congress established November 11th as the day to commemorate our military veterans:

“Whereas the 11th of November 1918, marked the cessation of the most destructive, sanguinary(bloody), and far reaching war in human annals and the resumption by the people of the United States of peaceful relations with other nations … this date should be commemorated with thanksgiving and prayer and exercises designed to perpetuate peace through good will and mutual understanding between nations ….”

Though first imprinted on U.S. coins during the Civil War, it wasn’t until 1956 during General/President Eisenhower that “In God We Trust” became the national motto. In 1957, it was then printed on U.S. dollars. Incidentally, it was the Eisenhower administration that added “under God” to our Pledge of Allegiance.

Could it be that a man who faced the horrors of war realized America’s need for reliance on our Almighty God?

A myriad of stories introduce this quote including, before entering a prayer meeting with a group of ministers, one said, “the Lord is always on the side of the right” to which Abraham Lincoln replied, “yes, but it is my constant anxiety and prayer that I and this nation may be on the Lord’s side.”

To anchor the debate about our Judeo-Christian foundation, I yield the floor to a gallant orator of his time. 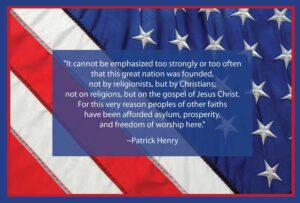 Yet, the Supreme Court removed the Bible and prohibited prayer in schools in 1962 and 1963. In 2015, the Court ruled that except in a historic context, the ten commandments had to be removed from government property.

The property belonging to the Judeo-Christian based government.

In 1981, then high school student Kelly Strong wrote a powerful poem entitled, “Freedom isn’t Free” – a tribute to his father who served as a marine in Vietnam.

President Ronald Reagan said, “Freedom is never more than one generation away from extinction. We didn’t pass it to our children in the bloodstream. It must be fought for, protected…”

Beginning with our Founding Fathers to today’s veterans, many have paid an enormous price for America’s freedom. We have the freedom to debate, to take our case to court, and even to snuff God out of our country.

Since nothing is free, what does Christianity cost?

Becoming a Believer in the Lord Jesus Christ is free to all because Jesus paid our eternal price.

2 Chronicles 7:14 says, “if my people, who are called by my name, will humble themselves and pray and seek my face and turn from their wicked ways, then I will hear from heaven, and I will forgive their sin and will heal their land.”

14 Replies to “THANKFUL FOR: FREEDOM”