Jesus gazed at the sparse crowd. “Everyone’s staying away.”

The exodus had started right after they challenged him. “Show us a sign. Our father Moses gave us bread in the wilderness.”

“The only sign you’re getting is from Jonah. He spent three days in the belly of a whale. If it’s bread you want, I am the bread of life.”

They scratched their heads and tried to catch him with words. As the argument heated up, the crowd thinned out.

Three days later, Jesus squinted at the twelve. “You guys leaving too?

Then glorious, motor-mouth Peter gave me one more reason to love him. “To whom else shall we go?”

Who else but Jesus? When he touched the hand of Peter’s mother-in-law, she got off her sick bed and made lunch for her gang of visitors. Then he said, “Throw your nets on the other side of the boat,” so Peter turned and hauled in fish until water sloshed over the gunnels. When Peter sank in the storm, he yelled, and Jesus yanked him up.

No one else. Only Jesus.

Speculation had it Jesus was John the Baptist, Elijah, Jeremiah or some other prophet.

“Forget them.” Businessman Peter cut through the chatter. “You’re the Messiah, the Son of the living God.” No one else.

Yes, Peter told the soldiers he’d never known “that man.” But then to whom else could he go? Regret. Bitter weeping.

When Mary cried, “They stole Jesus’ body,” John-boy won the race and peeked in, but gray-haired Peter lumbered up beside him, knees creaking, side shrieking. 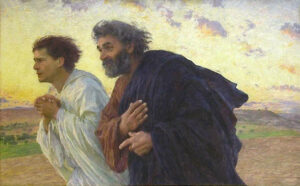 He stared into the tomb. Was Jesus in there? He shouldered John aside. Where else would he go?

To leave a comment please click on the title above TO WHOM ELSE and scroll down.  Thank you and God bless you!  🙂