Billy Graham had been struggling with Parkinson’s disease for more than a decade when leaders in Charlotte, North Carolina, decided to have a luncheon in his honor. 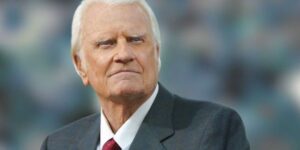 According to one article, Billy was reluctant to accept the invitation because of Parkinson’s and other age-related difficulties. Assured by the leaders that he wouldn’t have to give a ‘major address,’ he eventually agreed to attend.

A number of speakers offered eloquent accolades about Billy and eventually, after the applause hushed, he stood on the platform and began his address with:
“I’m reminded today of Albert Einstein, the great physicist who this month has been honored by Time magazine as the Man of the Century. Einstein was once traveling from Princeton on a train. The conductor came down the aisle, punching the tickets of every passenger. He came to Einstein, who reached in his vest pocket. He couldn’t find his ticket, so he reached in his pants pockets.

“The conductor said, ‘Dr. Einstein, I know who you are. We all know who you are. I’m sure you bought a ticket. Don’t worry about it.” Einstein nodded appreciatively. The conductor continued down the aisle punching tickets. As he was ready to move to the next car, he turned around and saw the great physicist down on his hands and knees looking under his seat for his ticket.

“The conductor rushed back and said, ‘Dr. Einstein, Dr. Einstein, don’t worry, I know who you are; no problem. You don’t need a ticket. I’m sure you bought one.’ Einstein looked at him and said, ‘Young man, I too, know who I am. What I don’t know is where I’m going.’”

Billy Graham continued his address, but here’s what he said that made all the difference:
“…when you hear I’m dead … I want you to remember this: I not only know who I am. I also know where I’m going. …Life without God is like an unsharpened pencil – it has no point. May each of us have lived our lives so that when our ticket is punched we don’t have to worry about where we are going.”

If you’ve accepted Jesus Christ’s gift of salvation (believe He died on the cross to save you from your sins, believe He rose again from the dead and is now sitting on the right-hand of God the Father, and you’re living your life to glorify Him), then your ticket has been punched, as Billy Graham had said. Now, lead those to your right and left to get their tickets too!

If in your hand you hold an unpunched ticket, the decision you make in the next few minutes will determine whether you spend eternity in Heaven or hell.

To leave a comment, please click on the title above, TICKET TO WHERE?, and scroll down. Please subscribe and return next week for another encouraging blog. Thank you and God bless you!  🙂

Thanks for stopping by Patti!!! I hear you, it’s heartbreaking, and the best we can do is pray pray pray that God opens their hearts!!! Love and hugs!!! 🙂

Thank you so much for sharing this, eMarie! So many people who don’t know where they are going have closed a deaf ear to this choice. Praying we can somehow reach them!

Love this article and the story Billy Graham told. Thanks for posting!

Thank you, Becky!! Stories about Billy Graham are such an inspiration – his love for Jesus is contagious!!! 🙂

Thank you, Kathy!! This story really touched my heart!! 🙂

Amen!! Love that – Lord work in us and give us opportunities to share the gospel!

Yes, and he never shrank from the battle!! Can’t wait to meet him!!! 🙂

So true! We want all to have the opportunity and to make the choice to choose Jesus. What tremendous influence and opportunities he had!

Thank you for sharing this. I love to hear anecdotes from Billy Graham. I’m so thankful that I know where I’m going, and I pray that I can be open to God working in me to reach others who don’t know where they’re going yet.

Oh, thank you!
Such a good story!

So well said, Erma. Thank you for sharing this amazing story about Billy Graham. A profound application.