Adrianus Valerius wrote this to celebrate a victorious battle against Spain’s King Philip II. Because the king was Catholic, he forbade Dutch protestants from gathering to worship. But when God brought about this victory, protestants were free to meet – a huge reason to praise and sing! 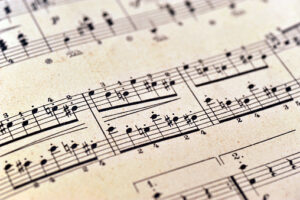 Composed to the tune of a familiar Dutch folk song, the hymn first made its appearance into an American hymnal in 1903—more than 300 years after its 1597 composition. As the song gained popularity in the States, various religions added it to their hymnals. During WWI and WWII, its popularity soared because folks could relate to the lyrics about the cessation of the wickeds’ oppressing.

This hymn was sung at Jacqueline Kennedy Onassis’ funeral mass, and an episode of West Wing referred to it. General Hospital, an American soap opera, generally had the hymn sung by their revered family, the Quartermaines at Thanksgiving.

When I was a child, we sang this song in church every Thanksgiving service. And during Thanksgiving plays in school. Our children have no recollection of the hymn, and I doubt our grandchildren know it.

Have you guessed the name of the hymn yet? Here’s a beautiful hint. 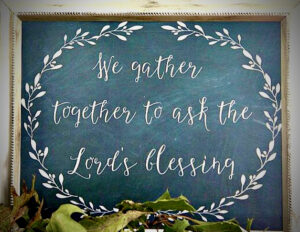 I have to admit that until I sat to write this blog, only the first two lines of “We Gather Together” came to mind. And though the hymn’s lyrics weren’t penned specifically for this purpose, the unending hope we have in Jesus to sustain, to make a way where there is no way, comes through loud and clear.

Oppression is nothing new and unfortunately continues all over the world. As in Valerious’s day, Christians/protestants are prohibited from gathering and speaking the name of Jesus in public. Yet, daring souls meet underground to worship, despite unimaginable, grave consequences.

What about here in America? In my humble opinion, we take our liberty to gather in the name of the Lord for granted.

This Thanksgiving, as we gather together with little or much, many or one, let’s pray for these dear, faithful Christians who are oppressed. Whose freedoms are restricted or denied. Who still whisper the name of Jesus with gratitude.

Let the name of the Lord be praised,
both now and forevermore. (Psalm 113:2, NIV)

12 Replies to “THANKFUL FOR: GATHERING”