An interesting story exists regarding William Driver, whose early years were less than stellar. In fact, he ran away from home instead of going to Sunday School. However, at age twenty-one, he was promoted to captain of a ship bound for the South Pacific. His mother and wife made him a flag, which he proudly hoisted on the mast. At the sight of his flag unfurling in the breeze, he exclaimed, “Old Glory.” Captain Driver served his country well, and his words became an affectionate nickname for our flag.

On July 4th, many Americans enjoy picnics in the park, family barbecues, fireworks, and display flags to commemorate our independence from England. The people of the United States of America have endured many hardships—wars, diseases, natural disasters, financial and economic downturns, civil unrest, and terrorism—to name a few. In recent years, our flag, a symbol of freedom, has come under attack.

Our founding fathers envisioned a country based on “liberty and justice for all,” a detail incorporated in our Pledge of Allegiance.

The colors and symbols carry the same meaning from the first to the current flag. The brilliant field of blue represents justice and perseverance. Fifty stars, one for each state of the union, gleam as bright as those in the heavens, placed by God’s design. Thirteen bold red stripes symbolize valor and courage, honoring the original colonies. 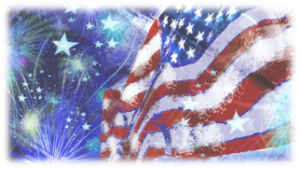 America’s flag stands for the hope of a new nation—perseverance, innocence, and purity—and the promise of justice and freedom.

Have we as a nation achieved the ideal of “One Nation Under God?” Not by a long shot. Wrapped in human frailty, we miss the mark.

But the God who created the vast blue skies, who secured the twinkling stars in the heavens, and who sent His son to bear our stripes, beckons. If my people, who are called by my name, will humble themselves and pray and seek my face and turn from their wicked ways, then will I hear from heaven, and I will forgive their sin and will heal their land. (2 Chronicles 7:14, NIV)

God bless America, and may we ever remain the land of the free and the home of the brave.

To leave a comment, please click on the title above, STARS and STRIPES FOREVER, and scroll down. Thank you!  🙂

24 Replies to “STARS and STRIPES FOREVER”