After creating the Heavens and the Earth, the Bible tells us God spoke light into existence. And He separated the darkness from the light.

The saying goes that a little light dispels the darkness. Jesus’s birth happened that way more than 2,000 years ago. 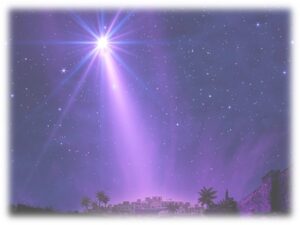 Several historians record that Shepherds at that time were thought of as a low-class, unclean, and lazy group of people. Some said their testimony wasn’t accepted as evidence. We might characterize shepherds as perhaps not the brightest bulbs in the box. However, they knew where to find water for their flock, when to drive them home before winter, and lead them into the hills during the summer heat. And they were known to defend their flock against predators.

So, why entrust the message of the King of Kings birth to these questionable types?

A group of shepherds were hanging out with their sheep in fields where David, former shepherd, boy King and forefather to Jesus, once tended his flock. It’s just another ordinary night. They rub their hands by the fire and take turns keeping watch, their ears tuned to jackals who would snatch away unsuspecting sheep . . . completely unaware of the long-awaited, imminent divine appointment.

In a noiseless moment, an angel joins them, and their flatbread and dried fish drop to the ground. God’s glory splits the sky and shines around them. A sudden, serious case of knee-knocking, heart-hammering, pulse-jumping, merciless fear riddles the shepherds.

The stranger in their midst calms them with light and words thieves would never speak. “Fear not.” Good News is proclaimed to them. To the people whose words are deemed least credible. Yet they become the first messengers to carry tidings of great joy—for all people.

Light has come! Jesus’s departure from Heaven is heralded by light! The heavenly host fills the sky, voice their praise to God, and announce peace between God and man.

Jesus is the light that bursts through the darkness of our world. The only light that shines good news.

Praying your Christmas is truly Merry and Bright!

To leave a comment, please click on the above words LIGHT HAS COME and then scroll down.  Thank you!  🙂