Humble yourselves in the presence of the Lord, and He will exalt you. (James 4:10)

I entered my first writing contest four years ago, I had no idea what to expect. When the results became available, I didn’t want to look. Then, I almost fell off the chair.  Someone wrote the words “first place” beside my name.

Prayer, hard work, and lots of help from fellow writers helped polish those chapters. After resubmitting the story a year later, it earned a semifinalist award in a nationwide contest.

Later that year, another story that I helped co-author won a first-place award. The year after, the same story earned a semifinal award in a nationwide contest.

You might think, wow, amazing achievements. Where can I buy your book?

Ha! The humbling truth is, I’ve lost more contests than I’ve won. Worse yet, I have not had a single traditionally published book.  (A Snowflake’s Adventure is a self-published children’s picture book written for my grandchildren and donated to children around the world. To date, my hubby and I have given OCC/Samaritan’s Purse almost 600 books.)  🙂

Why am I telling you this?

An adage that I learned back in first grade, thanks to Mrs. Titus, a wonderful mother figure, went as follows: “If at first you don’t succeed, try, try again.” Turns out, decades earlier, Mr. Thomas Palmer wrote these words in a Teacher’s Manual to inspire children to do their homework. 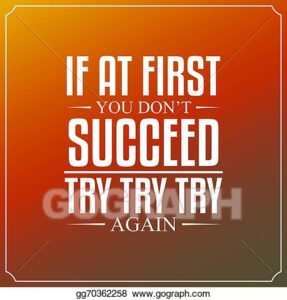 Seems Mr. Palmer’s life may have served as inspiration for his words. An immigrant from Scotland, he and his brother settled in Philadelphia where they established a print shop. Mr. Palmer’s interest in education led to his support for reform. When his brother passed away, Mr. Palmer moved to Vermont where, in his latter years, his accomplishments included farming, opening a school, setting up a library, and authoring textbooks.

If we’re honest, repetitive failure pulls toward despair like the world’s largest magnet.

What do we do then?

For me, spending time with Jesus changes everything. His love brings life. And His Spirit transforms, equipping me to do His work. Motivating me to be all He’s created me to be.

Whether a tweak in attitude, a bigger dream, a different approach to a goal, or more muscle, go to Jesus! Work at what glorifies Him, and let Him provide.

To leave a comment, please click on the title above, IF AT FIRST YOU DON’T SUCCEED, and scroll down. Please subscribe, share this site with friends, and come back next week for more encouragement!  Thank you and God bless you!  🙂

2 Replies to “IF AT FIRST YOU DON’T SUCCEED”